Having not written about any movies here in 2019, I was planning to rectify this with a roundup of some of my favorite horror/monster films of the past three or four years, just in time for Halloween. But something more urgent has come up.

On Friday afternoon, I checked my email and promptly felt my heart break.

The Art Theater, a historic movie theater operating in downtown Champaign since 1913, and a regular haunt of mine since late 2010 or so, is closing its doors.

I can’t remember with absolute certainty which movie I saw there first, but I think it might’ve been Metropolis (1927). It wasn’t the first time I’d seen it, but it was the first time in a theater, and a period-appropriate one at that. There was also an astounding feature-length documentary, The Extraordinary Voyage (2011), about the rediscovery and restoration of a hand-colored print of A Trip to the Moon (1902), the first-ever science fiction film, culminating in a screening of the restored film itself.

The first of many horror films I saw there was the classic Universal Frankenstein (1931). It was the first time I’d ever seen it, and of course it immediately became an all-time favorite. It’s the first movie-going experience I remember at the Art that was exactly that: an experience. It’s quite something to witness this scene for the very first time on the big screen, no matter how old you are. It was the first of many such memorable, sometimes life-changing moments within the Art Theater’s walls.

It was where told an ex I loved her for the first time, during a screening of House (1977). Perhaps it was just the first time she said it back, but in any case the memory of love blooming in the back row in the light of that sometimes horrifying, sometimes hilarious fever dream of a film is one I will always treasure. That ex and I would return to the Art many times before the relationship ended, including for a memorable screening of Miranda July’s whimsical drama, The Future (2011), a screening of Crispin Glover’s film It Is Fine! Everything Is Fine. at which we met Glover himself (and got his autograph!), and on a double-date to a screening of the iconic Nosferatu (1922) accompanied by a live orchestra. It was like traveling back in time.

My first kinda-sorta date with my current partner, Shelby, way back in 2014, was to an Art Theater screening of Willow (1988).

We laughed aloud at Warwrick Davis’s repeated cries of “Madmartigaaaaan!” and I hesitantly put my arm around her. She shrugged it off, but now it’s almost 2020 and we’re still together. She’s accompanied me (sometimes reluctantly) to countless Art outings, including such horror hits as Nosferatu the Vampyre (1979) and Midsommar (2019), which she liked, as well as Re-Animator (1985) and The Lost Boys (1987), which she liked less. We even caught a showing of The Exorcist (1973), which frightened her but left her not wanting to see it again. Perhaps the most surprising Art Theater experience with Shelby was a group venture with my sister and brother-in-law to see the unsurpassed urtext of American slashers, The Texas Chain Saw Massacre (1974) in September 2017. None of us had seen it, and while I expected to enjoy it, I did not expect to love it as much as I did, let alone for Shelby (not generally a big fan of horror films) to love it as well. But she did, and does to this day. It’s one of my favorite little discoveries about her, and it might not have happened without the Art Theater. Another we both loved was Border (2018), a dark Swedish fantasy based on a story by John Ajvide Lindqvist, author of Let the Right One In. 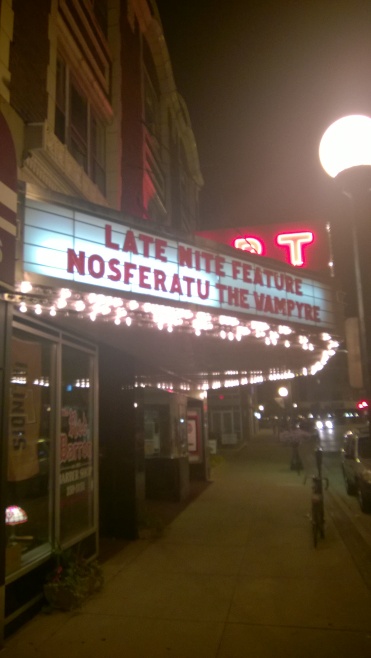 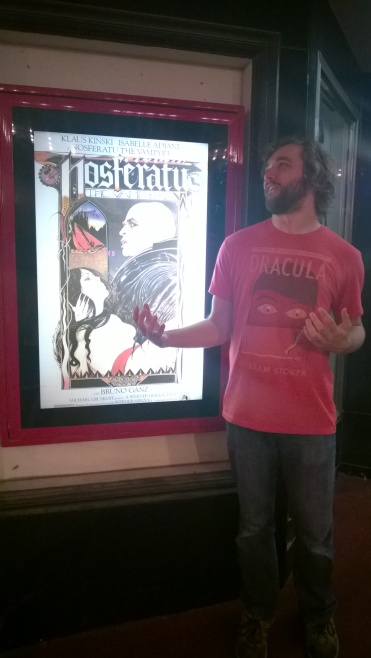 Though I did drag her to quite a few horror and weird fantasy flicks, we also saw romantic movies. Two Valentine’s Days in a row we made the Art our primary destination, first with Casablanca (1942), which I hadn’t yet seen, and then with Dirty Dancing (1987), one of Shelby’s favorites and one I was happy to rediscover. We also saw Purple Rain (1984) there, shortly after Prince’s death, and held each other as we wept through the titular song at the end.

Some of my most poignant memories of the Art are also solitary ones. Alone, I attended a screening of The Passion of Joan of Arc (1928) that reduced me to silent, shaking tears. Likewise, to a slightly lesser extent, with a screening of Stalker (1979), part of a month-long celebration of Soviet science fiction films in 2017. And again, with You Were Never Really Here (2017), an earlier, less derivative Taxi Driver-influenced psychological thriller starring Joaquin Phoenix that few seem to talk about anymore. And again, with Hagazussa (2017), a profoundly disturbing German take on The Witch that really deserves its own review here. And yet again, with Climax (2018), a largely improvised horror film that rivals both Black Swan and the recent Suspiria as a dance-centric descent into hell. And so on, and so on. The number of times I was moved before that screen, either alone or with company, are too many to mention, but here are a few other standouts:

The Art is where I first witnessed the work of Alejandro Jodorowsky, first with Jodorowsky’s Dune (2013), and later with Santa Sangre (1989). Just recently, I attended a pair of screenings with my mother, Echo in the Canyon (2018) and Sword of Trust (2019), that blew both our emotional socks off.

Just walking back to my car at night after a late movie became a cherished ritual, a rich little slice of time in my favorite part of town after, usually, a good sit. That little walk was best when I was by myself, to reflect on what I’d just seen or caw at the gigantic murder of crows that almost invariably gathers near the Busey Bank parking lot in certain months of the year.

One of the Art’s greatest contributions to the Champaign-Urbana community was its annual New Art Film Festival, a showcase of locally-made films at all levels of budget and experience. In 2017, one of the featured shorts was an eleven-minute black-and-white called “I Was a Teenage Nosferatu,” co-written and produced by Shelby Koehne and myself, and directed, shot, and edited by Jeff Kacmarynski on a total budget of approximately $1,000. The screening itself was less than perfect: the MC forgot to credit Shelby in his intro and, at the film’s pivotal moment, a local news cameraman BARGED INTO THE DARKENED THEATER WITH A GODDAMN SPOTLIGHT, immediately distracting half the audience (I still have absolutely no idea why that was allowed or even considered, but it did happen). In spite of those hiccups, the singular experience of a film I had a hand in creating premiering at my favorite theater was a joy I won’t soon forget. You can now watch the film in its entirety on YouTube.

In its final years, the Art hosted an all-night horror movie marathon as part of its annual “Shocktober” Halloween program. I attended two of these: the first in 2017, and the last earlier this month. In 2017 I went in costume, only to find myself the only one there who’d dressed up. I sat in the back, somewhat self-conscious, and sipped iced Irish coffee through the small breathing hole of my latex Brundlefly mask (eventually, of course, I took the mask off, but for a little while it was kind of fun sitting in a crowded theater as a composite of André Delambre and Seth Brundle, sucking alcohol through a tiny straw with the cup clutched carefully in one thick-gloved hand). The movies were Friday the 13th: The Final Chapter (1984), Halloween III: Season of the Witch (1982), The Last House on Dead End Street (1977), Eaten Alive (1976), and Nightmare Sisters (1988). I ducked out right before Dead End Street to change out of my costume, but returned in time for Eaten Alive and Nightmare Sisters.

I missed the marathon in 2018, but I did manage to see Chuck Russell’s remake of The Blob (1988) for the first time, and loved it every bit as much as the original.

The last movie I saw at the Art was the original Village of the Damned (1960), the third of five films chosen for Shocktober 2019’s all-night marathon. It was preceded by The Evil Dead (1981) and It Follows (2014), the former of which I’d never seen until that night, the latter of which was already among my personal favorites. By the end it was well after 2 A.M. and my eyelids were getting heavy, so I decided to go home early. If I’d known it would be my last time there, I would’ve powered through for the final two films. But if there had to be a last time, that’s not a bad triple-feature to end on.

I hope the Art is somehow able to return and continue, but it doesn’t seem likely. Champaign-Urbana is far poorer without it, and my life a little emptier.

Artwork from Champaign-Urbana’s Adventures in Time and Space escape rooms.

A Brief Coda to This Elegy:

As of this writing, the Art Theater’s management has, somewhat controversially, not elaborated on the precise reasons for shutting down, beyond a vague reference to “systemic challenges” brought about by a changing film industry. Despite whatever else may or may not have been going on with management behind the scenes, this rings true to me in the face of Disney’s ever-expanding monopoly and draconian handling of that which it has purchased. The Art would not be the first or last victim, and whether or not it bounces back under new management (as I sincerely hope it does), I’ll not be paying to see any more Disney-owned films until they change their policies.

One thought on “A Farewell to Art”