This is something I’ve feared for a little while now: the knowledge that I’ll never see Gene again at a convention. I first met him at Chicon 7 (the 70th World Science Fiction Convention) in Chicago, my first Worldcon. He was on a panel called “Learning to be Dangerous” with Liz Gorinsky, David G. Hartwell, and Connie Willis. He was the last panelist to arrive. I can’t remember much of the panel itself, although I do recall a woman in the audience coughing loudly throughout.

Afterwards I nervously approached Gene as he made his exit and we exchanged brief hellos, but I wouldn’t have my first real interaction with him until WindyCon 41 in Lombard, two years later. He wasn’t on any panels, or even listed as an official guest, but I spotted him and his daughter Teri in the dealer’s room, perusing some silver-headed canes. I watched them from a distance, hemming and hawing over whether I should approach or just leave them alone, and one of the dealers, noticing my distress, told me to just go ahead and go up to them.

“Gene’s a sweetheart,” the dealer said.

So I went ahead and went up to them, clutching a copy of the October/November 2004 issue of The Magazine of Fantasy & Science Fiction in my trembling fingers. I had brought it to be signed by another writer, my friend Richard Chwedyk (author of the beloved “saur” stories), and had actually just left a reading of Richard’s to hunt out paperbacks in the dealer’s room.

I introduced myself and asked if Mr. Wolfe would be kind enough to sign the magazine for me. Beaming proudly, Gene said of course he would, and as I offered him my pen Teri asked, “Would you like a picture?” Of course, I said yes, and without hesitation Gene linked arms with me.

He then suggested we take one with Teri as well, for the sake of fairness, and so I did my best to take a decent group selfie: 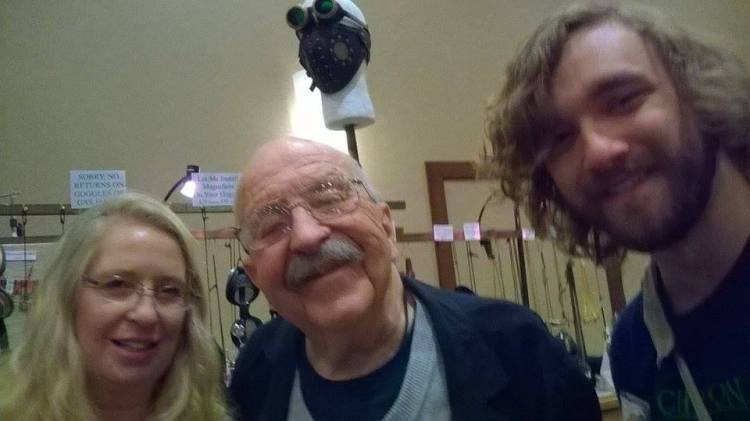 I didn’t remember until later that Gene had lost his wife, Rosemary, less than a year prior. And yet he laughed and quipped, welcoming fans like me with a big, gracious smile. He was indeed a sweetheart.

I saw him next only a couple of weeks later, at ChamBanaCon 44 in Champaign. He spoke on a panel with S. M. Stirling and Jean Rabe about novel-writing. I sat near the front and scribbled down notes. I found out that Gene was a regular guest at ChamBanaCon, and since the convention was both very close and very inexpensive, I decided to become a regular attendee.

Of course, then, I missed ChamBanaCon 45.

I made it to #46, though, and by this time I’d finished reading The Book of the New Sun in its entirety. Prior to that, I’d only read a smattering of his short stories, but by 2016 I’d been deeply bitten by the Wolfe. I brought the books for Gene to sign, and was able to catch him almost alone in the consuite. He seemed to remember me from our previous encounters, and we chatted for over an hour about The Island of Dr. Moreau and its various film adaptations, famous science fiction fans of years gone by, the origin of my last name, and writing in general. I was almost finished with an early draft of Nightbird then, and I briefly summarized the plot.

“That’s a good story!” Gene said. I contained my euphoric grin and back-patting until later in the hall, but only just.

Writer and musician Nathan Carson (yes, that Nathan Carson) flew over from Portland, Oregon to interview Gene at ChamBanaCon 47. It was wonderful to witness, and I’ll let the interview speak for itself (I was sitting just behind the camera). It was my first time meeting Nathan in person, though we’d been friends on Facebook for a couple of years, and we had a wonderful time hanging out, talking shop, and/or shooting the breeze over Chinese food. He signed some stuff for me and even joined me on my first-ever convention panel, on short stories. I was able to sneak in another consuite chat with Gene, this one shorter and a bit more crowded (more on that conversation can be found in my interview with Arm Cast Podcast, starting just after the 11-minute mark).

ChamBanaCon 48 was the last time I saw Gene. I hadn’t been planning to attend that year due to some recent changes in my home life, but on very short notice I was asked to co-host an interview with Gene similar to the one Nathan had conducted. I agreed, and began hastily coordinating questions with my co-interviewer, Andrew Busam. Andrew was a longtime die-hard fan like Nathan, while I was still a fairly recent convert and not as well-read in Gene’s bibliography. The interview went well, though I think I floundered a bit here and there. See for yourself.

After the interview, I gave Gene an inscribed copy of Nightbird in exchange for one last autograph, this time in my recently-acquired copy of Peace. I chatted a bit longer with him and Andrew in the consuite, and then quietly excused myself to go home.

And then, some five months later, on what will surely go down in history as one of the worst Mondays on record, I read the news online:

Gene Wolfe was dead, and Notre-Dame was burning.

Given Gene’s Catholic faith, it struck me as a peculiar pairing of tragedies. Of course, I knew he’d been ill for some time without knowing the details. And, as was the case when Harlan Ellison passed last year, many others will have more intimate remembrances of both the man and the body of work he left behind. I’m just thankful that I not only got to meet Gene, but become a repeat acquaintance of his. I’m thankful for his brilliant work, and even more so for his personal grace and humor. I’m more thankful than ever that I decided to go through with that last interview.

I’ll let Gene have the final word. During Nathan’s interview, he shared an anecdote (beginning at the 17:35 mark in the video) about driving to a formative writers’ conference and seeing a multitude of yellow dots on the road:

“As I got nearer, all the yellow dots flew up into the sky. They were goldfinches. And I don’t know what they had been doing with a flock of twenty, thirty goldfinches on the road, but that’s where they had been, and as I came toward ’em in the car they flew up. And I had the feeling, ‘I’m starting on a new life, this is a whole new thing that’s opening up in front of me.’ And I was right! It was! Y’know, I was gonna slowly give up engineering and move into being a pure writer, and that’s what happened. And I knew a whole different set of people, I was subject to a different set of rules and so on and so forth. I still remember the goldfinches. My favorite bird, by the way. They weren’t until they flew up in front of me, but once they had done that I clasped them to my heart.”