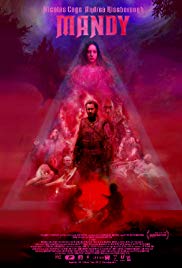 Mandy sort of came out of nowhere for me. I’d heard almost nothing about it and wasn’t very interested, and then all of a sudden my Facebook feed was flooded with hype and raves and Cheddar Goblins, and I decided I had to check it out. Set in a surreal 1980s California, it details the fantastically violent revenge quest of a logger whose girlfriend (the eponymous Mandy, played beautifully by Andrea Riseborough) is murdered by a deviant hippie cult. The movie is like a live-action segment of Heavy Metal made under the influence of Clive Barker, Terry Gilliam, and Tobe Hooper, punctuated with brief animated interludes that feel straight out of a Conan music video. It’s easy to imagine Alice Cooper in the role of the Manson-esque Jeremiah Sand, had this been made in 1983 (Linus Roache, previously best known to me as Thomas Wayne in Batman Begins, is appropriately menacing and sleazy). But Nicolas Cage is the star of the show, delivering not only the wild-eyed, Crazy Cage explosions we’ve come to expect, but also some chillingly grounded emotional moments. Mandy embraces the ’80s nostalgia craze without leaning too heavily on it, and it’s a must-see for anyone who likes weird action/horror/dark comedies and doesn’t mind some gore. It makes me even more eager to watch Cosmatos’s previous film, Beyond the Black Rainbow (2010), which has been highly recommended by several friends and sounds even more up my personal alley.

While I’ve got your attention, I’d be an idiot if I didn’t take the opportunity to talk up some recent/pending publications.  My story “From the Dusty Mesa,” originally published in Walk Hand in Hand into Extinction from CLASH Books in 2016, has found a second home in Unnerving‘s new anthology Haunted are These Houses, edited by Eddie Generous and Erin Sweet Al-Mehairi. 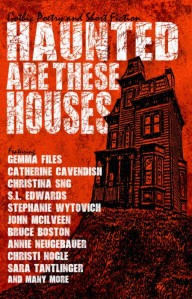 The theme is Gothic with a capital G, and I share a table of contents with not only some of today’s neatest horror voices like Gemma Files, S. L. Edwards, and Stephanie Wytovich, but also old legends like Edgar Allan Poe and Herman Melville, the latter of whom immediately follows my story in the book (insert giddy shriek of joy)! I consider “From the Dusty Mesa” one of my best stories, but even if you’ve already read it you’ll want to check this one out.

Also, now that contracts and money have been exchanged, I can announce that my Christmas crime story “Don’t You Play Your Games with Me” has been accepted by Crimson Streets for publication sometime in November/December, smack in the middle of the holiday season. This is a loose sequel to my previous Crimson Streets story, “Massacre,” but it’s also another story of the Midnight Witch (her third so far, for those keeping track). I’ll be sharing links to that as soon as it’s published.

Finally, my buddy Jeff Kacmarynski is working on his first feature-length film, and could use your help. If you like weird, surreal horror (and if you’re reading this there’s a good chance you do), please consider donating a few bucks: https://www.indiegogo.com/projects/essence-a-psychedelic-gothic-thriller#/backers. Full disclosure, I lend my voice to a talking cockroach in this thing, so if you wanna see that you really oughtta give us some support.

I’ll be reading/signing at Bob’s Bookstore in Charleston, IL on October 28th! If you’ll be anywhere near the Central Illinois area that afternoon, I encourage you to stop by and say hello! More info can be found on Facebook.